Michael developed Infantile Paralysis (Polio) in 1940. He was 2 years of age and the only known case in Essex at the time. He was hospitalised and remained there for 2-3 weeks whilst they decided what had caused the weakness in his legs. Both limbs were encased in plaster on and off over the next 4 months. The only treatment he received was massage.

In 1941 he had leg irons or ‘callipers’ fitted on his left leg until he was 16 years old, when an Orthopaedic Specialist in London performed an ankle arthrodesis operation to ‘set’ his ankle.

Michael was then able to walk with a stick and no longer wore callipers.

Up until 2012 Michael had an active career in the Food Manufacturing Industry as well as enjoying sporting activities such as Lawn Bowls.

4 years ago when on a trip to Jersey Michael fell and broke his femur which left him much weaker.

Michael went to a Polio Rehabilitation Unit at St Thomas’s Hospital in London, where over 6 days he was seen by Physiotherapists, Psychiatrists and received Acquatic Physiotherapy treatment.

He was put in touch with a specialised rehabilitation gym that had been recommended, who devised an exercise program for the specific needs of a Post Polio patient, for an hour a week, although he has to pace himself to avoid aggravating his condition.

Two years ago Michael came to PhysioFunction for Aquatic Physiotherapy treatment to maintain his strength.

The benefits of Aquatic Physiotherapy Michael found were enormous. He could move freely as the water took his weight.

The nature of Michael’s condition meant that he couldn’t tolerate cold water so the warmth of the hydrotherapy pool was ideal and in addition the warm water relieved his pain.

Michael could also use the buoyancy of the water to aid some low grade strengthening exercises which he wouldn’t be able to achieve outside of the water. He was also able to challenge his balance in standing and walking instead of depending on crutches. Cardiovascular exercises were part of his Acquatic Physiotherapy routine which were also good for his general health and well-being.

Michael’s confidence has improved considerably in the water and he can now swim the breaststroke independently in the pool.

Pool safety and independence were also covered by Kirsten Good, PhysioFunctions physiotherapist who specialises in Acquatic Physiotherapy and this enabled Michael to go on holiday and enjoy the pool without putting his safety at risk.

PhysioFunction has given Michael the confidence to plan for a future with Post Polio Syndrome. 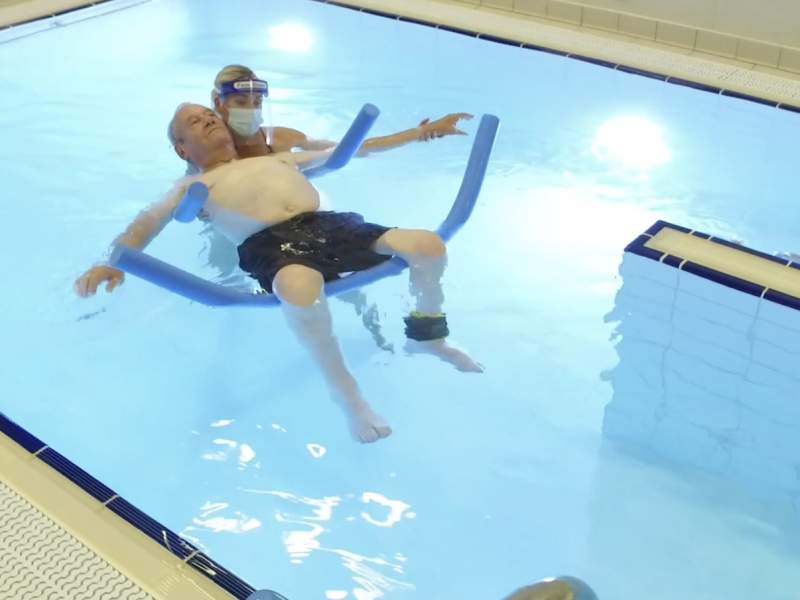