During the Swine Flu epidemic, in September 2009, Neil started to come down with concerning symptoms so rang the NHS helpline for advice. He was prescribed Tamiflu for his illness which he took the same day but woke up the next morning with a numbness in his right arm. Initially Neil thought he had slept in an awkward position but after several hours he was struggling to breathe, so contacted the doctors who suggested he should go straight to A & E.

Neil went to the hospital and told them that he thought he may have swine flu and was therefore put into an isolation room. After being initially seen by a nurse they thought Neil may have had either viral meningitis or pneumonia. He was moved to Emergency Admissions Unit where he continued to be monitored. They couldn’t run any MRI scans or other tests that involved lying down because of his limited breathing when doing so.

An on-call doctor arrived and as soon as he saw the predicament Neil was in, he sent him straight to theatre to be put on a ventilator to help him breathe. Neil woke up 10 days later to find that he was now completely paralysed.

Once he woke from the coma, they then carried out an MRI scan and saw inflammation of the entire spinal cord, which indicated a condition called Transverse Myelitis and after a nerve conduction test, peripheral damage was found which was attributed to Guillain Barre Syndrome. He also tested positive for mumps.

Neil was in the Intensive Treatment Unit at Northampton General Hospital for 12 months; the doctors didn’t know where to put him because of his ventilator.

He had his laptop connected whilst in ITU and continued to work remotely for his company, once he was strong enough.

After 12 months he was then transferred for rehabilitation at a care home, but the rehabilitation wasn’t what Neil had expected and he continued his rehab at home over the next year.

Neil has always had a great work ethic and his job as an IT support engineer is important to him, so as well as working whilst in ITU, he also went out to work for one day a week while in the care home and gradually built back up to working 5 days a week over the following few years. Neil takes 1 or 2 PA’s with him to work to assist logistically and with any tasks he cannot physically do himself and also uses a voice activated laptop.

The community physiotherapist didn’t have the time to come and see Neil regularly at home, so his carers were shown how to carry out some exercises to help. A physiotherapist told Neil’s wife about PhysioFunction, as Neil lives in Moulton and he then started coming to PhysioFunction 18 months ago.

Since coming to PhysioFunction Neil’s all round strength has improved and he feels pushed to do more, be more proactive at home and it has given him focus again. 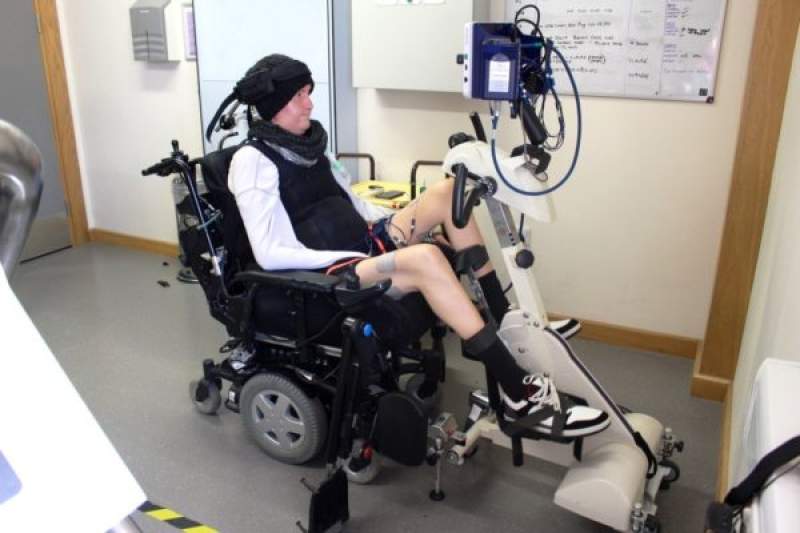 Lucy Frost - Daughter of a client.

Back to Case Studies