Bradley shared his incredible life story with us when he visited our clinic in Northampton and trialled the new L300 GO.

His story began when he was 3 years old and his parents noticed he was stumbling a lot when walking, not unusual in 3-year olds - but it seemed to happen all the time. Bradley was referred to a Paediatrician who recommended an MRI scan and his parents were given the devastating news that Bradley had a brain tumour.

The tumour was diagnosed as a Grade 2 Astrocytoma but lay deep within the brain so was classed as ‘inoperable’. However the fact that it was ‘cystic’ meant it could be reduced in size by an operation where fluid was drawn off , thus resulting in reducing the pressure inside Bradley’s head.

This was carried out at the Radcliffe Infirmary, Oxford and was followed by six weeks of Radiotherapy.

Life then became as normal as expected for a few years until Bradley reached the age of 18. He had just completed his A’ levels, got a place at Portsmouth University to study Media and Journalism, and was looking forward to going on a Mediterranean cruise with his family to relax over the summer. Prior to going on holiday, Bradley started to feel unwell but put it down to stress following his exams and so continued with the cruise. However, several days into the holiday the pains in his head became un-bearable and was taken to see the Ship’s Doctor. The Doctor performed a number of tests and recommended a brain scan when the ship docked at port in Cephalonia the following day. The scan showed a ‘mass on the brain’ and Bradley was flown back to the UK; where he had an operation at The John Radcliffe Hospital and was fitted with an Ommaya Reservoir. The reservoir enabled fluid to be drained from the tumour by a surgical procedure and without the need for an operation each time it was necessary.

Once again, life returned to normal, although Bradley was still experiencing headaches. He decided not to pursue University but began working in the family business and went to college to learn accountancy.

Suddenly at the age of 23, Bradley began having seizures as the fluid in the Ommaya Reservoir was building up far more quickly than ever before and the withdrawal of fluid was needed to be carried out every few weeks rather than every month as previously.

One day Bradley had a massive seizure. The pressure had built up to a dangerously high level and the medical team had no option but to operate to relieve the pressure as quickly as possible. It took 10 days for the pressure to reduce and Bradley’s parents were told that there was now no option but to perform life threatening surgery to remove the tumour.

Bradley’s Neurosurgeon performed the operation using a new type of ‘tracking’ system that weaved in and around certain areas of the brain’ which resulted in the removal of 95% of the tumour- the operation had been a success!!

Following the operation, Bradley felt confused, his memory had reduced, and he could not recognise everyday objects. However, as time passed, the part of brain that was damaged started to be compensated by the other side and things significantly improved.

Bradley also was unable to walk at all for the first few days, then gradually as time went on and with help and support he was able to take his first steps. Every step was a challenge and he began to set himself targets to achieve; starting with very small goals as he would tire quickly. His targets were both metal and physical, as he felt he needed to get back ‘on track’ - he’s a fighter and will never be beaten.

Bradley was discharged from the hospital in Oxford and went into rehab at The Royal Berks where he met his Neuro Physio (Karen) who became key in Bradley’s successful rehabilitation following his operation.

We met Bradley in April 2017 when he first attended a session at our Centre of Excellence in Moulton, Northampton. Bradley had been using the Odstock PACE wired device for approximately 2 years, and this had been provided to him from local NHS services.

Bradley was using the device intermittently, he found it useful in his walking, but time consuming to put on in the morning and the wires were a challenge at times!

Our Neurological Physio assessed Bradley with the L300 unit, this had good effect and Bradley liked the cuff-based system the lack of wires and the smoothness of stimulation. On our advice, Bradley decided to continue with the Odstock PACE device until the L300 GO system became available. Our Neuro Physio was keen that Bradley persisted with the Odstock PACE to promote heel strike and ensure that the calf muscle did not tighten.

In May 2018, Bradley was invited to our L300 GO assessment day. The new device was easy to fit, and Bradley was able to walk with no footswitch required. Bradley felt that his walking felt ‘easy’ with the new L300 GO and received his new device a few weeks later and hasn’t looked back!

Bradley has been able to walk confidently in barefoot for the first time in years, he has been tackling new challenges when walking in his local park, now climbing steps and hills more quickly and easily than before. The cuff-based system is much easier to put on, saving Bradley more than 20 minutes when getting ready for the day. 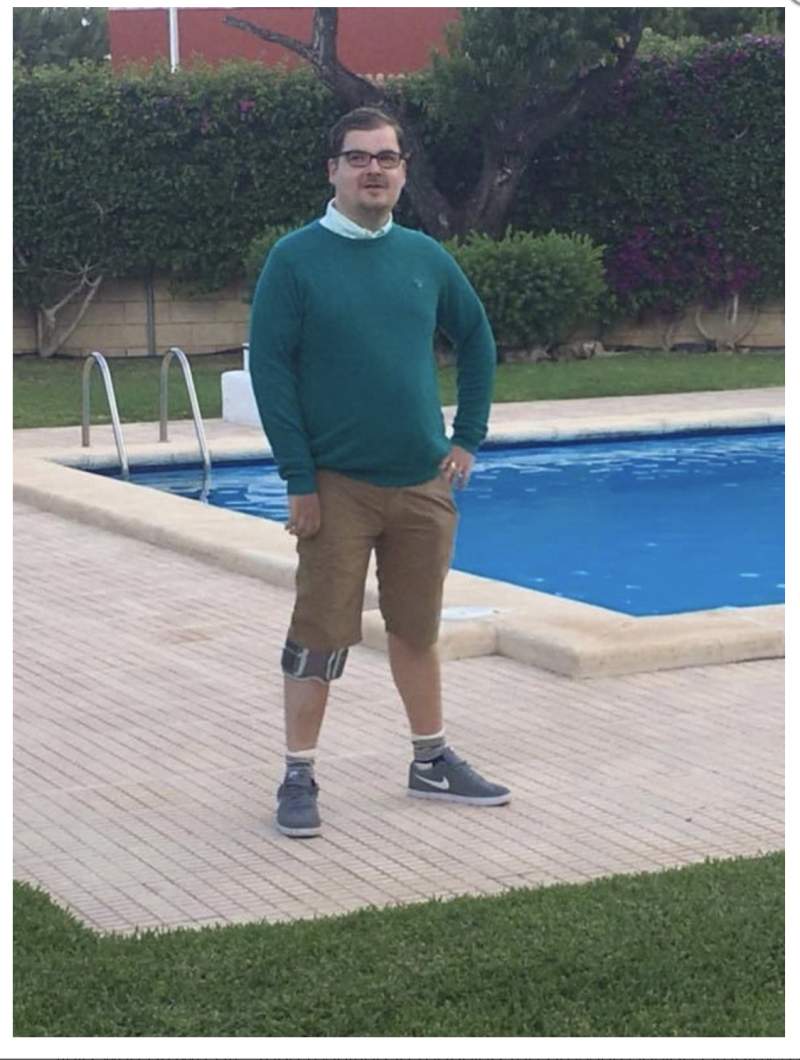